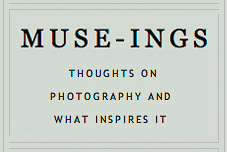 I‘m eagerly awaiting Karin Apollonia Müller‘s new book On Edge. I‘ve talked in the past about Karin‘s first book Angels in Fall – which, by the way, you no longer have to fork out $400+ as it‘s been reprinted and is once more affordable for us photo-peasants. I‘ve seen a few of the pictures from the book on websites, but I‘m looking forward to seeing the whole thing. One of the main things about her work that draws me into it is the way she is able to convey the quiet strangeness of the city which she knows intimately yet is still an outsider in it.

„On Edge is Karin Apollonia Müller’s second monograph, and the first to be published by Nazraeli Press. While Angels in Fall (2001) dealt with the disconnect between human beings and their environment, On Edge shows the earth “crumbling away”, and our futile efforts to control or hide the subtle invasion of nature into cultivated spaces. Working in color with a muted palette and low contrast, Müller creates powerful images which evoke a sense of displacement in keeping with the artist’s “visitor status” as a foreigner in Los Angeles.“

p.s. – I love parents who give their children names like „Apollonia“ (like my colleague Pandora). Possibly teased at school, but it sure is a great hook when you want to be an artist…

Well, the short wait was definitely worth it. I got back after the weekend and Karin Apollonia Müller‘s new book On Edge was waiting for me in the mailbox.

First of all it‘s a lovely production by Nazraeli Press – large, but not too large (12“x15“) and at 48 pages very easy to hold, which for me is important in a book of photographs. A classically simple cover in the Nazraeli style (the translucent wrapper is a nice touch), and the reproduction and colour is very very good. In fact the colour is gorgeous – in a very understated way (more on that shortly).

And no words – apart from the usual title and isbn stuff. Which is surprisingly refreshing, although me being me, I always want to know more about the work. Though as I think on it now, while I have some photo books with fantastic or important introductions and essays, often returned to, I probably have far more where the writing is somewhat helpful, but just not in the same class as the photographs.

But back to the content. In these photographs it feels like Müller has become less the visitor and more the settler or immigrant. Still not at home, but more at ease. In the course of this her pictures have become in some ways more effectively veiled while her colour has become more full (which could also be partly a function of the printing?) but still retaining the translucency that characterized her earlier book. And her eye has become both more subtle and more penetrating – even more aware of the incongruous, (though not without the odd touch of humour).

I like the way that the view Müller presents is more often than not from above ground level, sometimes far above ground level. As well, the incongruity in so much of what she sees, woven carefully into the tapestry of the overall image. Is that house on the hillside twisted and uneven because the ground has been swept away from beneath it? Or is it the result of a local architects attempt at a postmodern Gehry like design? Is that really a very large cabbage painted on the side of that building? Why does the tattered cocoon on a building under construction appear to have been put on upside down. Her photographs aren‘t purely – or even – didactic.

She shows us a place where people really shouldn‘t really be living – at least with the current constraints of our unimaginative, budget level building and construction methods, poor planning and our insatiable desire for space.

The work shows many places – in one of the worlds most well know cities – that seem entirely provisional – on edge. Dwellings that are considered permanent, yet which are anything but, and which nature (often with our unthoughtful help) quickly make transient and temporary.

Müller also shows us so many of the in between spaces, the terrain vague, of the city where nature wages a constant campaign to retake this place in whatever way it can – gradually by vegetation or rapidly by fire or erosion.

I think of some of the villages and towns in Italy and Greece which, for a few hundred years or so, seem to have managed to find ways to co-exist with such landscapes and wonder why this isn‘t so here.

The book presents us with a very contemporary sublime – not Turner‘s or Cozens‘ sublime of the awe-full, unknown Alps – but a sublime constructed of our own dreamlike fantasies of „civilization“ projected onto a landscape which constantly resists our imposition.

On Edge is certainly one of my favourite photo books of the year so far.