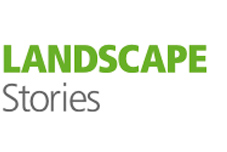 Angels in Fall and On Edge

LS: Are there any photographers, bodies of work or artistic movements that have influenced or inspired you?

KAM: Answering this question I procrastinate. I fear to limit myself by listing some photographer artists and forgetting others. What has influenced my work is probably the discovery of the tool “camera”. It dragged me out into the world and made me look at it. I began studying illustration at the Folkwang School in Essen. We had to take mandatory classes in photography, I had never taken a photograph before. I was inspired by exploring the world with this tool and liked encountering the unexpected.
If I have to give you names of those who have had the greatest influence on my work, I would like to name Casper David Friedrich, Claude Lorrain and William Turner, Landart artists such as: Robert Smithson, Richard Long and Andy Goldsworthy, and writings by Ralph Waldo Emerson, Henry David Thoreau and a Greek philosopher named Plotin, whom I speak of in awe.
The first photographers I was introduced to when studying were Gary Winogrand and Lee Friedlander. I admire Joel Sternfeld´s and Robert Adams´ work, I adore Mark Steinmetz´ and John Gossage´s work, I cherish Paul Graham´s and Wolfgang Tillman´s work amongst many others.

LS: How much were movies a source of inspiration for you when you started to search for your photographic style?

KAM: I did not deliberately set out looking for a particular photographic style, I have just been doing what comes naturally. Nevertheless, I esteem Godard’s, Tarkowskij’s and Kieslowskie’s film work.

LS: Referring in a particular way to the difference between America and Europe… What attracted you towards landscape, urban spaces and architecture?

KAM: I would like to distinguish between California and Germany or even between two cities – Los Angeles in California and Essen, in Germany. Essen appears like a hulk, compact and close, solid and rooted. The terrain is marked with history and proper freeways. The characterization of the landscape gives the feeling of location and position. To live in Los Angeles is to experience disorientation, history shifting along lines of displacement and entertainment. In Los Angeles there is a transposing, reversing and exchanging process taking place that leaves definitions of landscape influx. These landscapes no longer seem stable. However, my work is not limited to the city, and is in fact, it is only occasionally concerned with the “urban.” “The city” is a model for conceptualizing photography across land, populations (people), and technologies. Urban theorist Henri Lefebvre states that “the city” is a dialectic, an occasion for reflection on the fleeting and ephemeral movements of the city. Thinking the city moves towards thinking the world. Violence is latent, as seen in one particular image of a lone man carrying his mattress across a vast parking lot. In another, a man has found rest and shelter from a rainstorm under an orange plastic sheet, and towering above him are high-power electric lines that cut through recycling plants and railroad yards. What is inhabitable is habitable. Man has shaped an environment that appears on the ground intricate and of insurmountable complexity, yet a distant view suggests our fragile role and inconsequential attempt to order the world in a secure home.

LS: In “Angels in Fall” you describe a different Los Angeles far from Broadway, Beverly Hills or the Hollywood film industry. As the title suggests, your research explores also the sense of social contradiction and class relations of the city. What is it that you find inspirational about the city? How can we find a link between Los Angeles, the local area where the work was done, and its meaning?

KAM: The gaze of the detached observer seems strangely similar to infrared military imaging, federal law enforcement surveillance, and horizons produced by CGI digital effects that no longer distinguish between human and non-human, individual from group, butmaps heat, movement, distance, height, and speed. Landscapes ready to “receive” or resist human crafting, are empty not of people, but of the durability of human habitation. The city became a “place” of uncertainty, where homeland and identity are (in Arjun Appadurai’s term) situated in “technoscapes” in which “indigenous”, “traditional,” and “exile” are not fixed categories bounded by national boundaries. This is the Los Angeles that for decades, people have fled to — the city of fantasy, celebrity, Noir, and fame.

LS: “The kinds of landscape I try to find in my films… exist only in our dreams. For me a true landscape is not just a representation of a desert or a forest. It shows an inner state of mind, literally inner landscapes, and it is the human soul that is visible through the landscapes presented in my films.” Werner Herzog (Herzog on Herzog, edited by Paul Cronin) – Looking at some images of your project “Angels in Fall” I remember these words of Werner Herzog… Do you share the details of his thought?

KAM: Yes! Herzog even continues in his text: “This is my real connection to Casper David Friedrich, a man who never wanted to paint landscapes per se, but wanted to explore and show inner landscapes.” Without any doubt, I am sharing his thoughts. How couldn’t I, especially after previously mentioning that I have been influenced by the German movement of romanticism and specifically by Casper David Friedrich.

LS: Referring to your work ‘On Edge’. Could you tell us a little more about this work?

KAM: I wanted to show nature’s power over us. I am interested in how the earth seems to be crumbling away by encroaching on nature, and in our desperate attempts, we are trying to control or hide the subtle invasion of nature in cultivated space. I wanted to evoke an elevated level of anxiety, brought on by our witnessing of the systems we’ve created reaching their breaking points, and the realization that we don’t seem to be able to maintain the world we’ve created for ourselves. In one photograph, for example, a tiny helicopter floats into the abyss of smoke like a gnat into a forest fire. In another, houses slide down a hillside as though anchored to nothing.

LS: What has been your favorite photo-book in the last few years?

KAM: I have not looked or bought photography books over the last couple of years. Not surewhy. I recently recommenced looking at photography books, and what has impressed me more than anything else is Christian Patterson’s ‘Redheaded Peckerwood’. I bought it two weeks ago, just before it sold out.

LS: What are you working on right now?

KAM: To the project ‘The Fable of the Ineffable’.